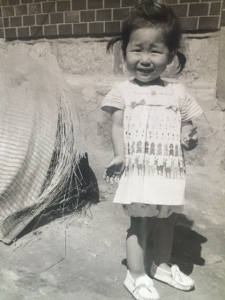 My maternal grandmother told me my kidnapping story long ago when we shared a bedroom together in my parents’ first home in America. She often talked about her life in Korea, but was always very emotional whenever this topic came up because she felt responsible for what happened. Although my grandmother passed away several years ago, I still think of her as a kindred spirit having lived through this experience together. This kidnapping tale piqued an interest in my roots, and was one of the inspirations for my book.

Excerpt from my book about the kidnapping

“My grandmother and I shared a special bond because of something that happened to us in Korea. I was too young to remember the details, but when I heard the story from my grandmother and saw the tears in her eyes, I knew it was true. My grandmother had been watching me and my baby brother one day when my parents were at work. I was about three years old, and was playing outside with a few neighborhood kids. My grandmother heard my brother crying, and went inside briefly to get him some milk. When she returned, I was gone, but the rest of the kids were still playing. She asked them where I had gone, and they told her that a strange-looking man had taken me away. Panicked, she wandered around the streets asking neighbors and everyone she saw whether they had seen a three year old girl with an unfamiliar man. 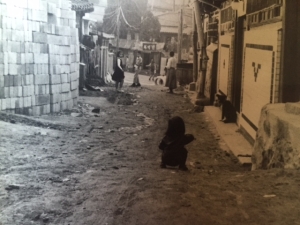 Kidnapping was not an uncommon occurrence in Korea in those days, and there were rumors that lepers were responsible for many of the kidnappings. According to an old Korean myth, it was believed that eating a child’s liver would cure a person of leprosy. Leprosy is a chronic infection that leads to inability to feel pain and results in loss of parts of extremities, like fingers and feet. With this thought probably in the back of her mind, my grandmother was frantic with worry. But she did not want to alarm my mother and father too hastily so she continued her search for a little while longer until she ran out of hope. She finally contacted my mother and father at work, and they rushed home to help look for me. A few hours later and with no clue as to my whereabouts, they resigned themselves to calling the police.

But then, suddenly, a man who owned a small corner market a few blocks away, appeared, carrying me in his arms. The market owner said he had heard about my disappearance, and noticed a deformed man holding a small girl’s hand in front of his shop. He said to the strange man, “Hey, who is that there!” and the man dropped my hands and ran off. When the market owner looked at me, my face was smeared with charcoal and tears, and I was sucking on a lollipop. Apparently, the kidnapper had enticed me with candy and disguised my face with charcoal, a common material used to heat houses in those days. My grandmother and parents were so grateful to the market owner who found me that they gave him generous gifts while they were living in Korea, and then again when they would visit Korea, deliberately seeking him out to pay their respects. They talked about him with great admiration because he saved my life.” 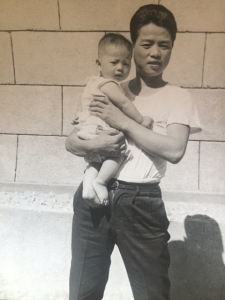 Neighbor who saved me

To this day, I am grateful for my neighbor who saved me. I have gained empathy for people with leprosy who were ridiculed, made to feel ashamed, and sometimes banished to leper colonies on islands far away. I have since researched the plight of lepers during the Japanese Occupation and beyond in Korea, and their stories are tragic.  The fortunate thing is that the disease is now curable with treatment, and the number of people with the disease worldwide has shrunk from over five million in the 1980’s to about 200,000 now.

My kidnapping story has influenced who I am. I am grateful to be alive. I developed a close bond with my grandmother. I learned to respect my elders. I researched my family history and wrote a book about it. I have compassion for the disadvantaged. I am an optimist. I appreciate every day (or at least I try to).

I miss my grandmother very much, and I’m thinking about her more since Valentine’s Day is around the corner. I used to make my grandmother fresh popovers because she loved them. Have you shared an experience with someone that has changed the course of your life? What did you learn from it? What special activity do you do with your loved ones to show you appreciate them?